Interiors is an online film and architecture publication, published by Mehruss Jon Ahi and Armen Karaoghlanian. Interiors runs an exclusive column for ArchDaily that analyzes and diagrams films in terms of space. Their Official Store will carry exclusive prints from these posts.

Star Wars (1977) is more than a film. It’s a worldwide phenomenon. The Star Wars saga is its own universe, and with such distinct characters and mythology, even talking about Star Wars: Episode IV – A New Hope as a standalone film (which is part of such a larger whole) is a fascinating exercise. It’s quite remarkable that for a film that takes place in space, in worlds outside of ours, it still holds up, architecturally. 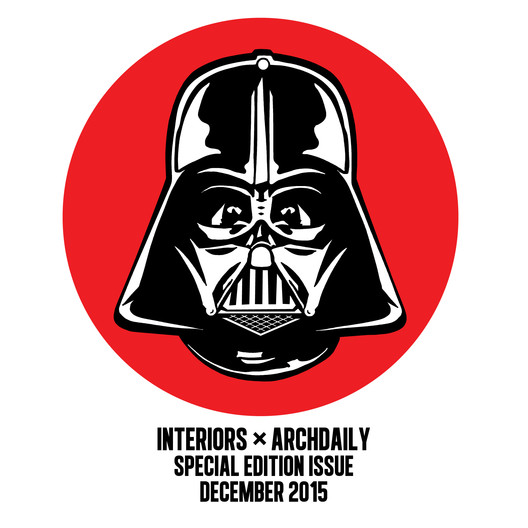 The Millennium Falcon is commanded by Han Solo and his sidekick, Chewbacca. The ship, we learn, has exchanged numerous owners and has undergone many upgrades and modifications. Han Solo, for instance, picked up the Millennium Falcon from Lando Calrissian, who installed compartments built into the floor. This additional level is used for smuggling, but it’s also noteworthy because this addition later saves our core group as they hide in the smuggling compartments when the Millennium Falcon is captured by the Death Star. In this sense, it’s the architecture – an addition made to the existing space – that protects our heroes.

Architecture is also important in establishing the power of the Empire and the relative lack of power of the rebels. The Millennium Falcon is 34.37 meters in length, 25.51 meters in width and has a depth of 8.27 meters, whereas the Death Star is its own world. The Death Star boasts a population of 1.7 million military personnel and 400,000 droids. This is the Empire’s ultimate weapon – a seemingly unstoppable force capable of destroying entire planets.

The pivotal architectural scene in the Death Star comes when Luke Skywalker and Princess Leia try to outrun the Stormtroopers and attempt to swing across a broken bridge. The production team had one Death Star set that was constructed, which was originally used for their swing, and was later redressed for Obi-Wan Kenobi’s scene in which he turns off the tractor beam. This particular scene is interesting because of the way it was shot. There are numerous camera angles from across, below and above that allows the audience to connect to the scene architecturally.

The colossal scale of the Death Star is stressed many times in the script and in external views of the structure, but it’s also reinforced by spaces such as the broken bridge scene. The bridge exists in a colossal – and practically functionless – vertical shaft, a space which emphasizes the size of the Death Star megastructure through its frivolous use of the space and the way it vertically connects what we imagine must be hundreds or even thousands of floors.

It’s also a noteworthy scene because of its contrast to the Millennium Falcon; whereas in the earlier scene, the characters escape capture because they know the space inside and out (literally), in the Death Star, Luke Skywalker and Princess Leia attempt to navigate an unfamiliar space, along with the audience. However, the Stormtroopers chasing the heroes are unable to capitalize on this unfamiliarity by using a superior understanding of the Death Star’s architecture; we might even assume that, because of the huge scale of the Death Star, the Stormtroopers are similarly unfamiliar with the spaces in which the action is taking place.

In this sense, it is architecture – and the characters’ relation to it – that allows the Rebel Alliance to hold their own against the might of the Empire. On the Millennium Falcon, they are kept safe thanks to their control over the small space; on the Death Star they are able to escape because of the Empire’s relative lack of control over their own domain.

It’s also important to note that the Death Star is ultimately destroyed in Episode IV; as a result, its only appearance is in this film, whereas the Millennium Falcon continues making an appearance in future films. Star Wars laid the foundation for films of its kind. In 1977, during a time when visual and digital effects were in its infancy, filmmakers used physical models in an effort to create a sense of authenticity. In Star Wars, we have a film that is both epic and intimate, a film where its architectural sets play a key role in its narrative and help establish a believable universe that exists on its own.

These diagrams, along with others, are available for purchase in our Official Store.